Terrace for Rantasauna and Barbecue for Village Living Room

Published: 21.6.2021
We are developing Otaniemi one area at a time to delight the residents and members. Last year, a terrace was built for Rantasauna and the village living room got a new barbecue. The working bee for the terrace was organised by the Guild of Electrical Engineering in the honour of its 100th anniversary and the barbecue was built by the Campus Section. A big thank you to all the participants!

Rantasauna in Otaniemi is one of the most popular venues in the Aalto community. Its location by the Laajalahti bay, right in the heart of Teekkari Village, provides an excellent setting for organising events and sauna evenings. In the honour of its 100th anniversary, Aalto University’s Guild of Electrical Engineering organised a working bee to build a terrace by Rantasauna in the spring of 2020. The terrace greatly increased the comfort and accessibility of outdoor facilities.

"We considered many locations and options. Rantasauna is used by many, but previously there was no pleasant area to spend time outdoors”, says Simo Hakanummi who participated in the working bee.

In 2014, a hot tub was added to the yard of Rantasauna. However, the yard has not been very accessible. In the working bee, the terrace was significantly extended and now it reaches the hot tub by the front door and the barbecue. Access to the yard is still slightly steep and there are bumps due to rain gutters, but now the terrace has a proper and even base.

"About 40 guild members participated in the working bee to build the terrace in late July”, says Elias Hirvonen who organised the project. “We had a great time and this was a very pleasant project. At first, we were worried if anyone could participate because of their summer jobs, but so many people came to help us. I am not a master builder either, but you learn by doing. We tested the final result by jumping and the terrace is strong enough to handle technical students”, laughs Hirvonen.

Construction material for the terrace was sponsored by the TTE-Fund, and AYY provided food for participants. The opening ceremony took place at the end of July once the COVID-19 situation had eased. Later in the early autumn, video about the progress of construction was published on YouTube and an article on the project was published in Sössö magazine of the Guild of Electrical Engineering.

The Campus Section consists of AYY’s volunteers and its purpose is to develop and maintain the sense of community on Otaniemi campus. The section members organise working bees and junk bike collections in the village but also renew AYY’s rental saunas and venues. Every year, one of the rental properties gets a new look, decor or whatever they come up to!

In 2020, the section focused on the Village Living Room at Jämeräntaival 5. The facilities had new decor and furniture already in the connection of basic renovation in 2019. At the same time, stone paving was renewed in the inner court. In the summer of 2020, a barbecue was built in the inner court to delight all the residents and users of the facilities.

”We noticed that Teekkari Village needs more barbecues and we found a suitable place by the Village Living Room”, says Niilo Viitanen who was leading the project in the Campus Section. “The inner court was not previously used much but now there is a nice atmosphere and a reason to come outside to the yard”.

After a few weeks of hard work, the barbecue was ready in July and it was very popular at the end of the last summer. In the past academic year, rental facilities had to be closed down due to COVID-19 situation, but hopefully the barbecue will be used again this summer or next autumn at the latest.

Pictures of the construction of the barbecue by the Village Living Room and the terrace at Rantasauna. 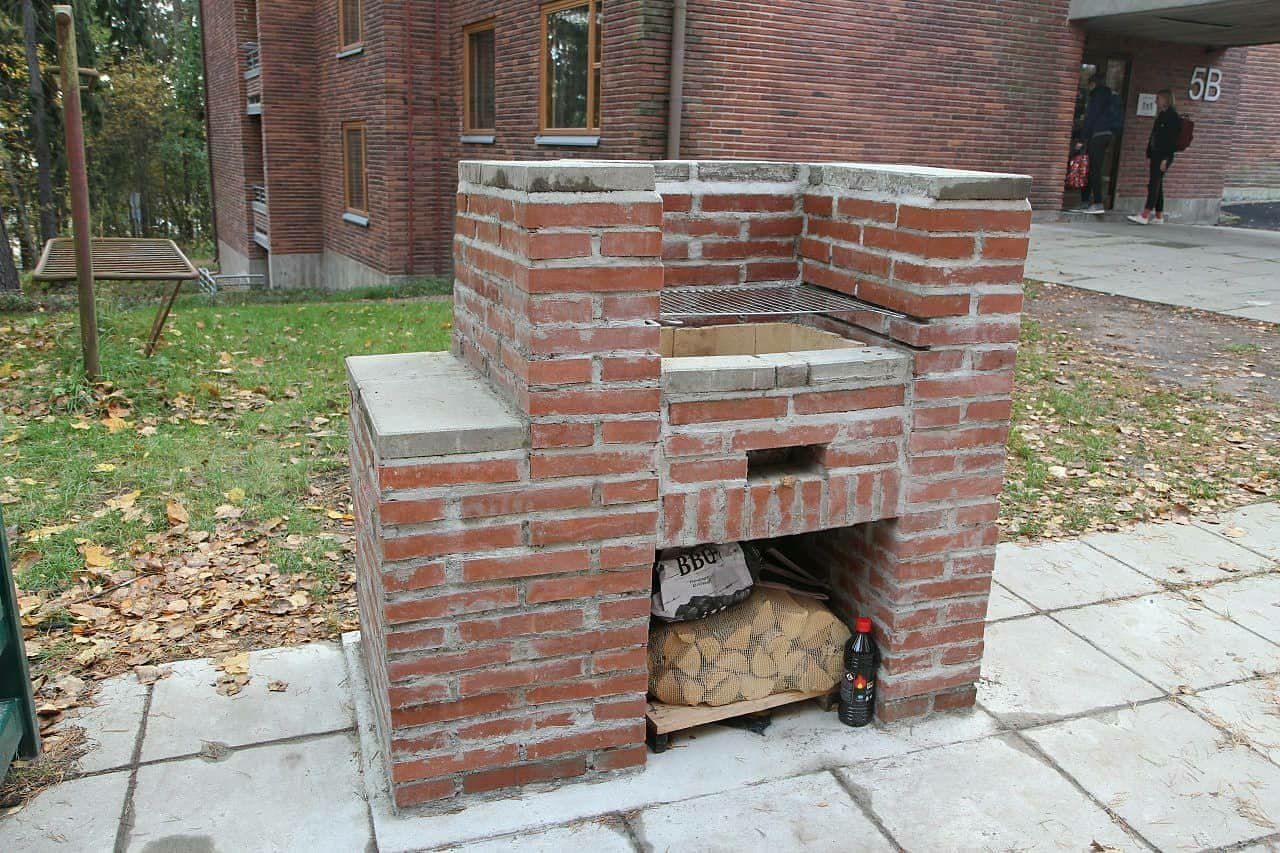 Barbecue built by Campus Section in the inner court of Jämeräntaival 5 by the Village Living Room. Photo by: Maija Saari 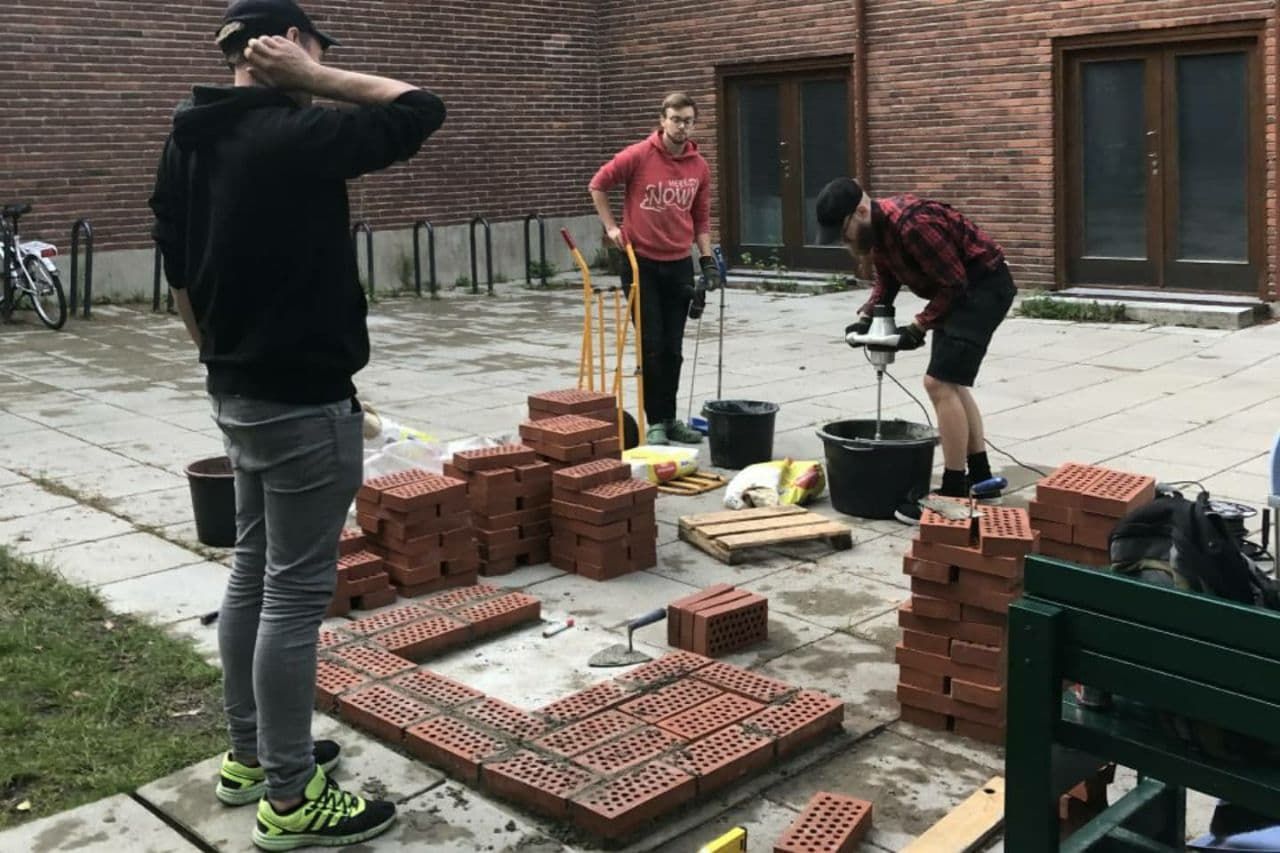 Campus Section members Ville, Kyösti and Samu building the barbecue in the summer of 2020. Photo by: Laura Nikola 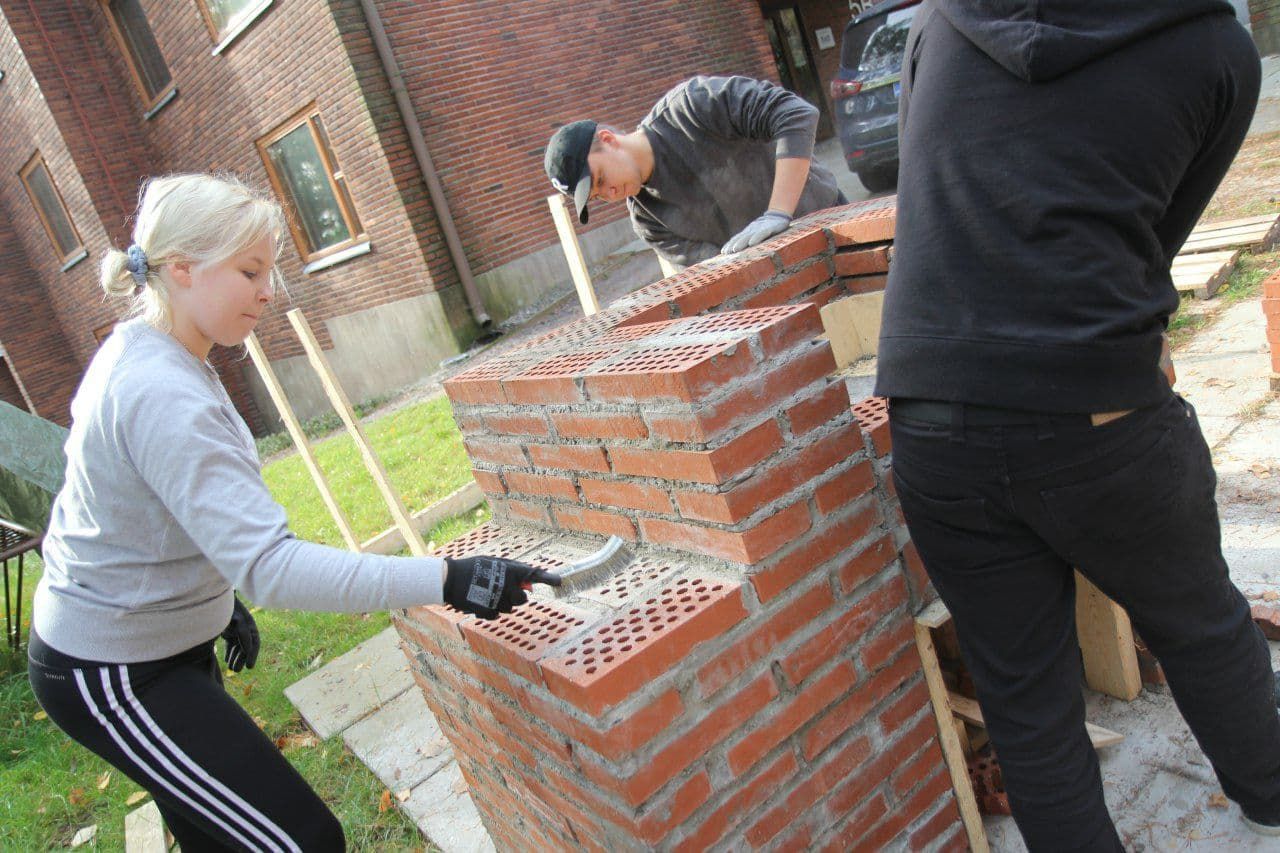 Building the barbecue took a few weeks in the summer of 2020. In the picture, campus section members Laura, Niilo and Samu. Photo by: Maija Saari 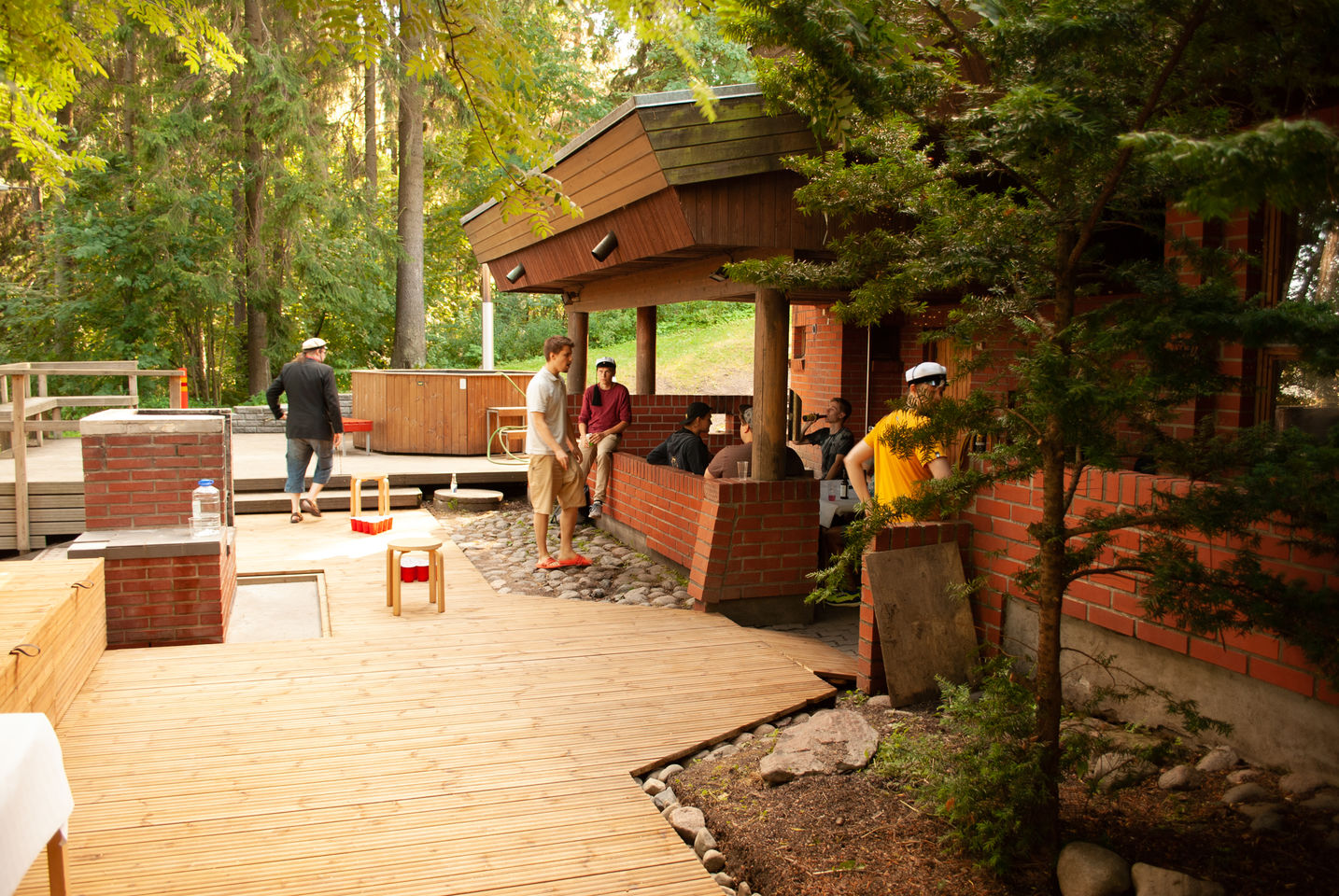 Terrace by Rantasauna built in the working bee of the Guild of Electrical Engineering. Photo by: Oskari Lahti 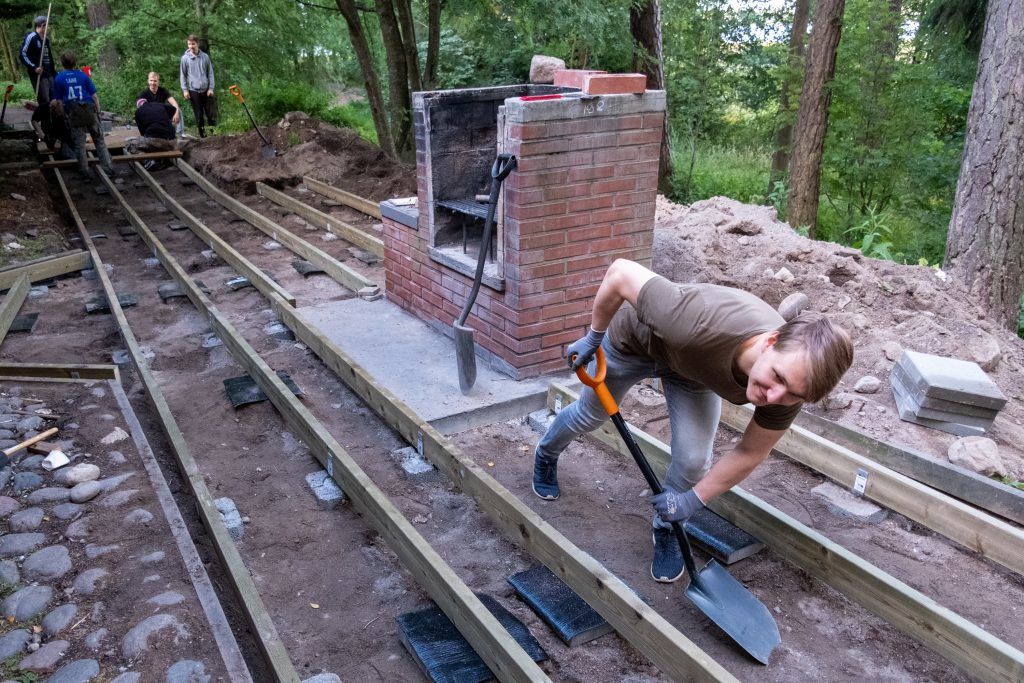 Rantasauna terrace built in the summer of 2020. Photo by: Sasu Saalasti 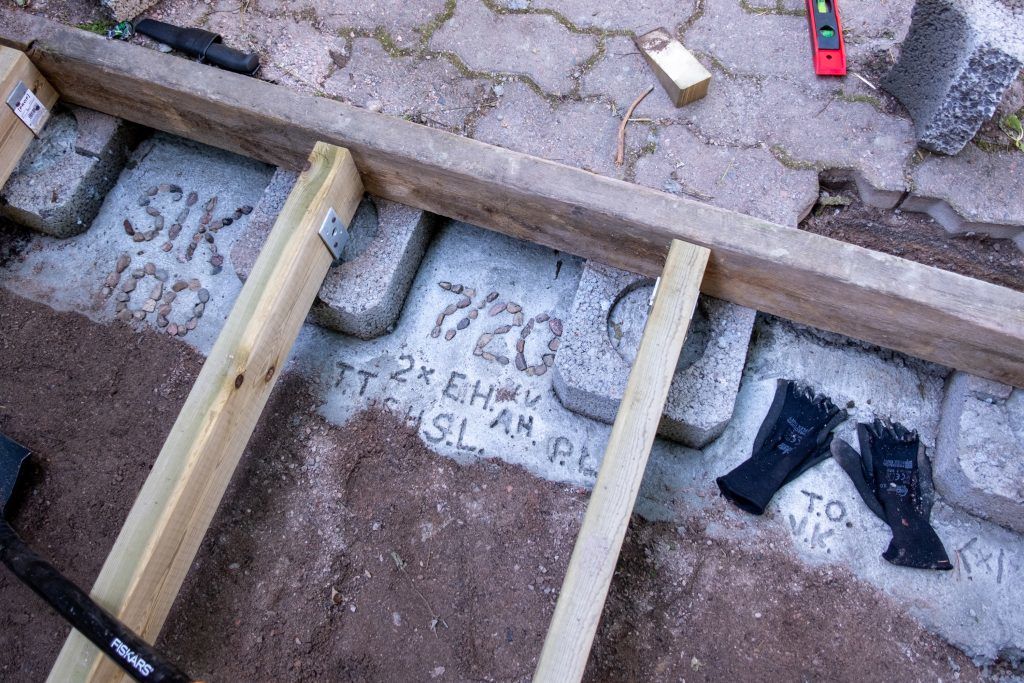 The text SIK100, date and initials of the workers were inscribed on the foundation of the terrace. Photo by: Sasu Saalasti ja Toni Ojala 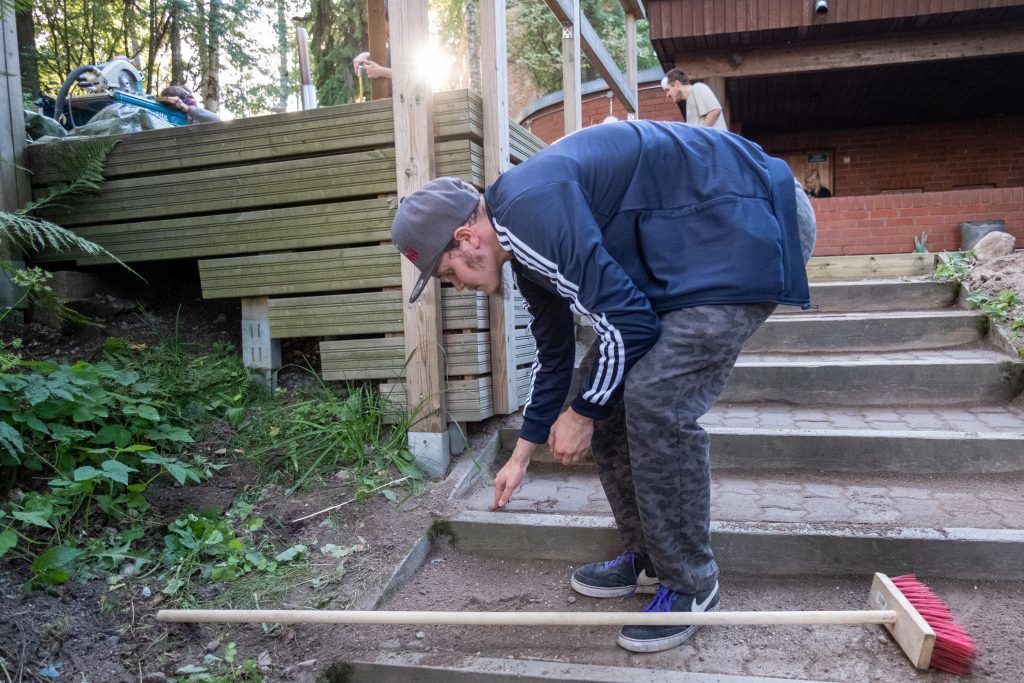 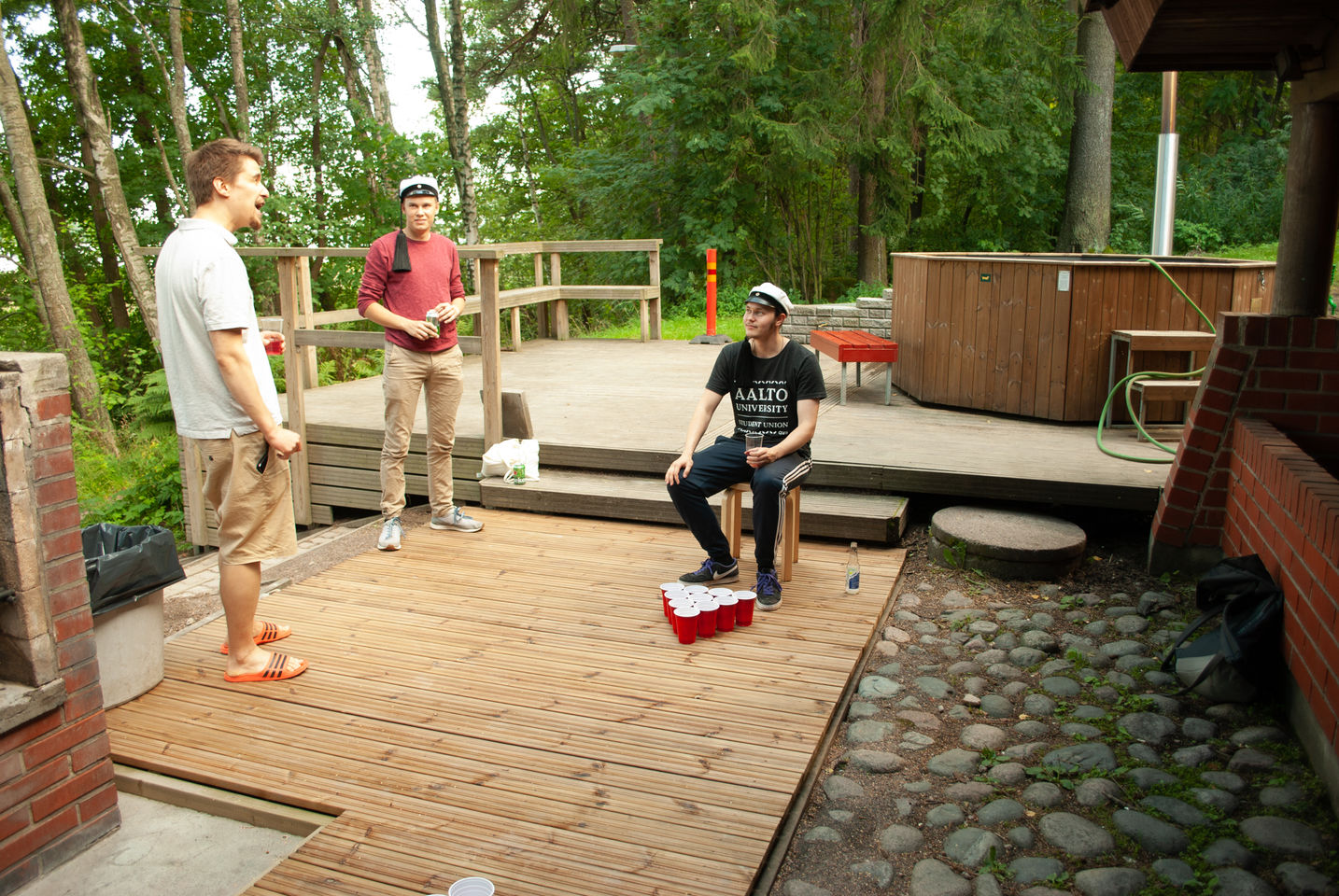 All set! Photo by: Oskari Lahti

Planning for next projects

This year’s Campus Section project is to repair the beach volleyball court next to Servin Mökki and possibly to build another barbecue somewhere in Teekkari Village. In addition, the Campus Section starts to check junk bikes by adding tags to deserted bikes found in basements and yards of AYY’s properties for the junk bike collection organised in the autumn. More detailed information on the collection will be updated on AYY’s site . Please also follow the Campus Section on Instagram (@kampusjaosto)!

Both Rantasauna and Village Living Room and plenty of other AYY’s rental venues and saunas can be rented at a member discount rate in Espoo and Helsinki. You can book facilities with your Aalto username at tila.ayy.fi or by contacting member services with this form.

PLEASE NOTE! Check the current instructions and restrictions on the use of facilities in the updated coronavirus release. According to the decisions made in June 2021, the Village Living Room can be used with restrictions on the number of users, but the main space of Rantasauna has not been opened yet.

PS. If your association is planning projects that develop Otaniemi and the campus, we are happy to write a piece of news on AYY’s website! Also remember the opportunity to apply for project grants from the TTE-Fund: http://tter.ayy.fi/

The Campus section develops, maintains and activates the Otaniemi campus. It aims to create an even more enjoyable place to live and study, creating the requisites for student culture, community spirit, and wellbeing.

The Living Room of Teekkari Village is suitable for a wide range of social events and evenings.

Rantasauna, more commonly known as“Rantsu”, is a sauna built and funded by engineering students. There is also a hot tub available.

Apply to SYL’s General Assembly Delegation or to candidacy for the SYL Board!

The National Union of University Students in Finland SYL represents university students in national decision-making. The plan of work and policy paper guiding SYL’s advocacy work will be approved at the General Assembly, where the Board of the Union will also be elected. The 2022 General Assembly will be held on 18ꟷ19 Nov 2022at Korpilampi.
Ajankohtaista, Press release Published: 14.7.2022

AYY has decided to sell some of its residential properties in Helsinki – more student housing zoned for Otaniemi.
Ajankohtaista Published: 13.6.2022

Student of Architecture Suvi Vendelin is the first student to join the Board Nomination Committee of Aalto University as a student member. She attended her first meeting in May 2021 and continues on the committee for another year.
Ajankohtaista, Blog Published: 9.6.2022

Why do we still celebrate Pride?

In honour of Pride Month, the rainbow student association GAYY's Board opens up the history of the Pride movement in this blog. The promotion of the rights and equality of gender and sexual minorities has been a long and rocky journey so far. By understanding history, we get a better picture of the current situation and which issues have changed and what still needs to change. Fortunately, society is becoming a better place, but change does not happen on its own.
See all