Published: 7.6.2021
Plans for the construction of student housing on Miestentie and Otakaari are progressing at different stages. In total, up to 1,000 new apartments are planned for Otaniemi. Depending on the progress of zoning and other plans, it is possible that all projects will be completed during the 2020s.

Aalto University Student Union owns 2,600 apartments in the Helsinki metropolitan area, which are home to 3,200 members of the Student Union. The new construction projects would increase the total number of apartments by approximately 1,000 apartments.

The plans have progressed especially on Miestentie in a new residential area in Otaniemi, which is located along Ring Road 1 near Otaniemi and Keilaniemi. More than 200 apartments will be built in the immediate vicinity of the current Miestentie 2B buildings. In addition, about 700 apartments in four different buildings are planned for Otakaari.

In addition to student housing, AYY is involved in a joint venture of the Student Center, which progressed to the signing of agreements in mid-May. AYY, Foundation for Business Students in Aalto University, Swedish-speaking student nation Teknologföreningen (TF) and Aalto University have agreed to build a student center. You can read more about this project here.

A joint student housing complex of AYY and the Foundation for Student Housing in the Helsinki Region (Hoas), which is divided into two sections, is located on Miestentie. These 131 apartments of the first phase were completed in early 2019. In the autumn of 2020, the second-phase plans officially progressed in AYY’s Representative Council to the design phase.

The second-phase plans include a similar joint student housing complex with Hoas. What makes the project unique is that student housing is included in the same property as a fire station of Länsi-Uusimaa Rescue Department (LUP). The design phase has progressed fast and the project has introduced the RTS environmental classification. The ambitious target level of the classification guides the entire project into a sustainable and responsible direction.

The Miestentie project has introduced the RTS environmental classification, which guides the entire project on the basis of sustainable development criteria. The target level was set at a four-star rating and this target will most likely be achieved. This has required significant investments in environmental friendliness.

In practice, this means that the building is designed to be energy efficient and the project invests in environmentally friendly and low-emission materials. The plan is to execute a geothermal system for the project and the utilisation of solar electricity has been considered in the planning.

Students’ opinions according to their answers to the most recent housing surveys are considered in the Miestentie project and the development of AYY’s properties. The apartments in the future properties will mainly be small studios preferred by the students.  As a specialty in the Miestentie property, apartments will also include storage space for personal property. This has made it possible to improve the cost-effectiveness of the building with less corridor space as there is no need to build a separate basement storage. During the spring, the plans have progressed to more specific kitchen plans and sketches of common facilities and sauna on the top floor.

Accessible common facilities for residents and a laundry room will be built on the street level. Common facilities and sauna with a great view will be located on the top floor. The next phase is to choose surface materials for kitchens and toilets, for example, and the opinions of students will be asked.

Illustration of plans on Miestentie 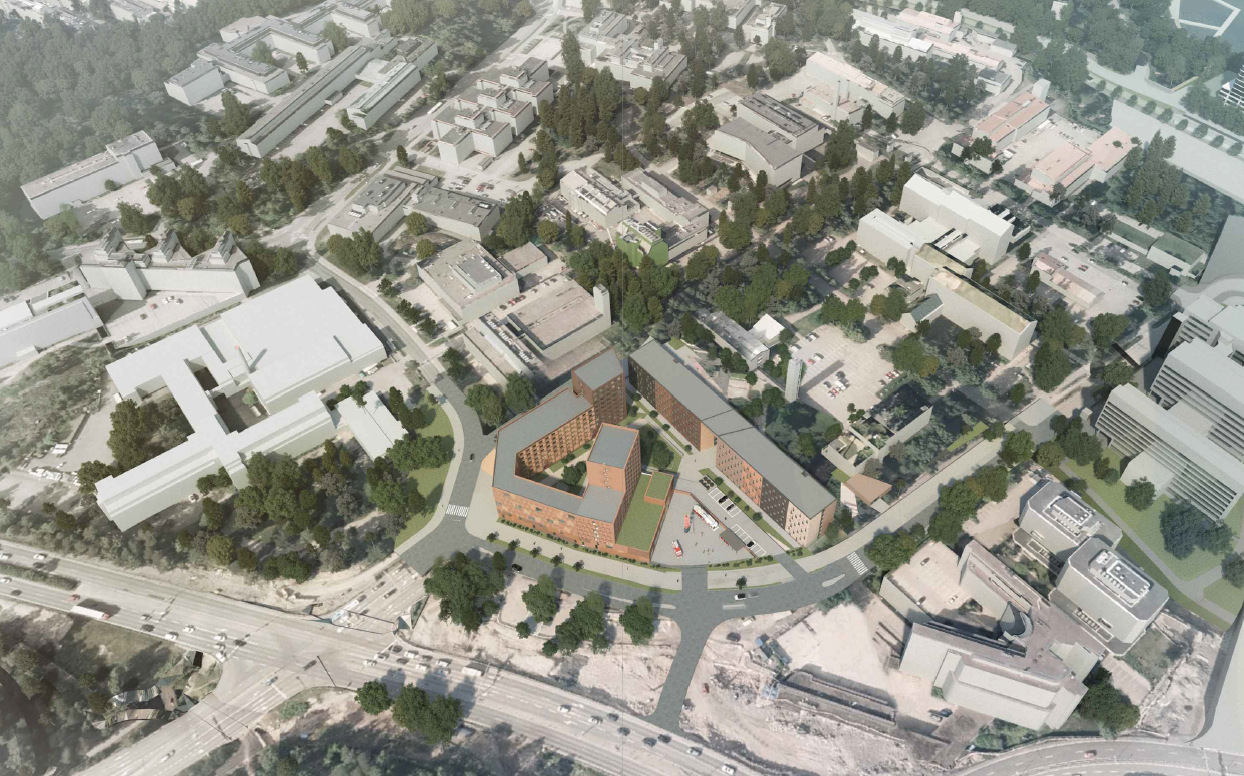 The first-phase apartments on Miestentie were completed in early 2019, pictured right. The second-phase plans include a similar joint student housing complex with Hoas. 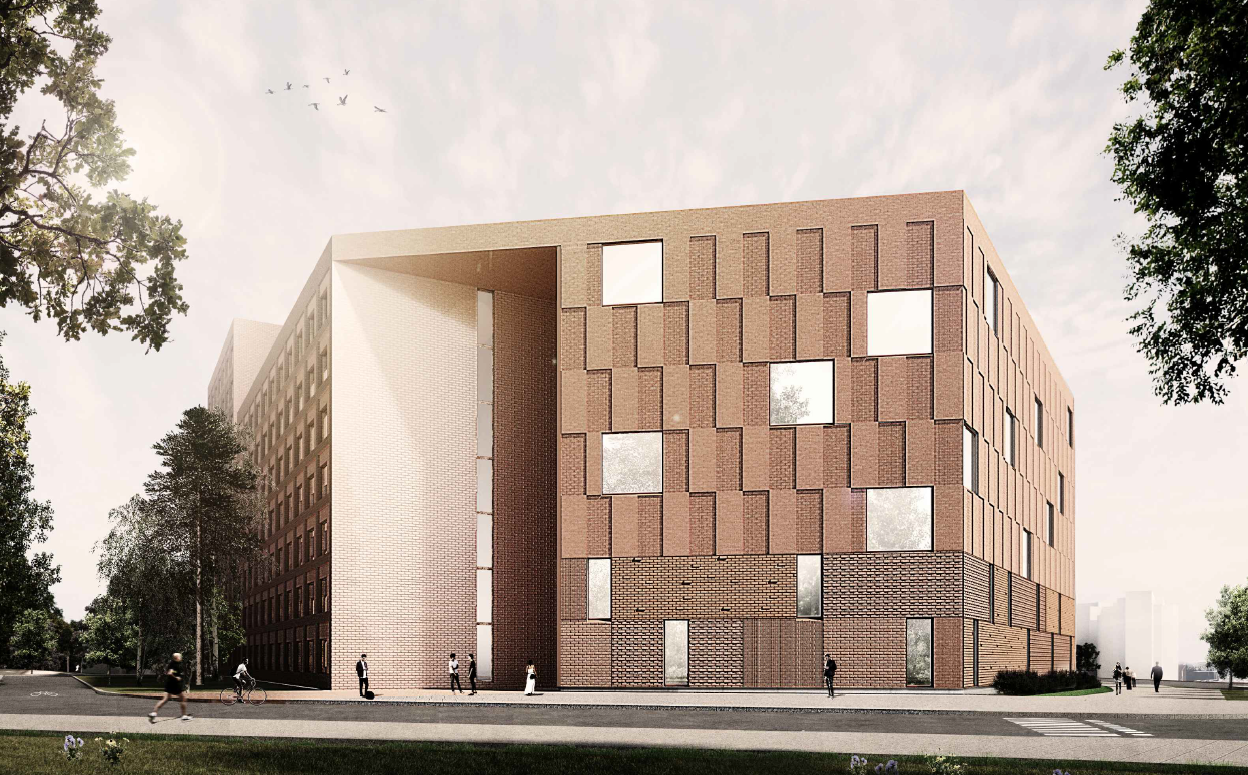 Illustration of architectural plans on Miestentie, view to the north. Windows on the facades of the buildings are as large as possible so that apartments have as much light as possible. A variety of reddish bricks are used on the facades. 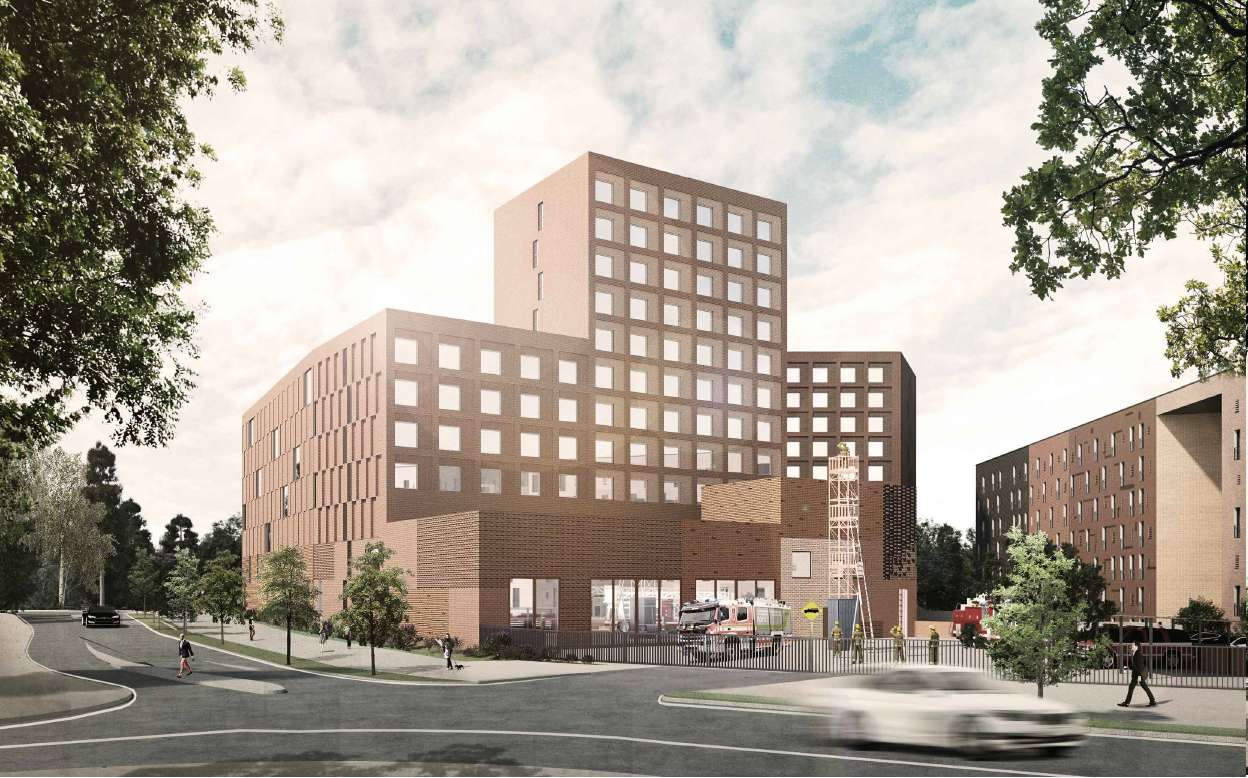 Illustration of architectural plans on Miestentie, view towards the fire station. The premises of the fire station are located on two floors and partially overlap with the residential building of Hoas. 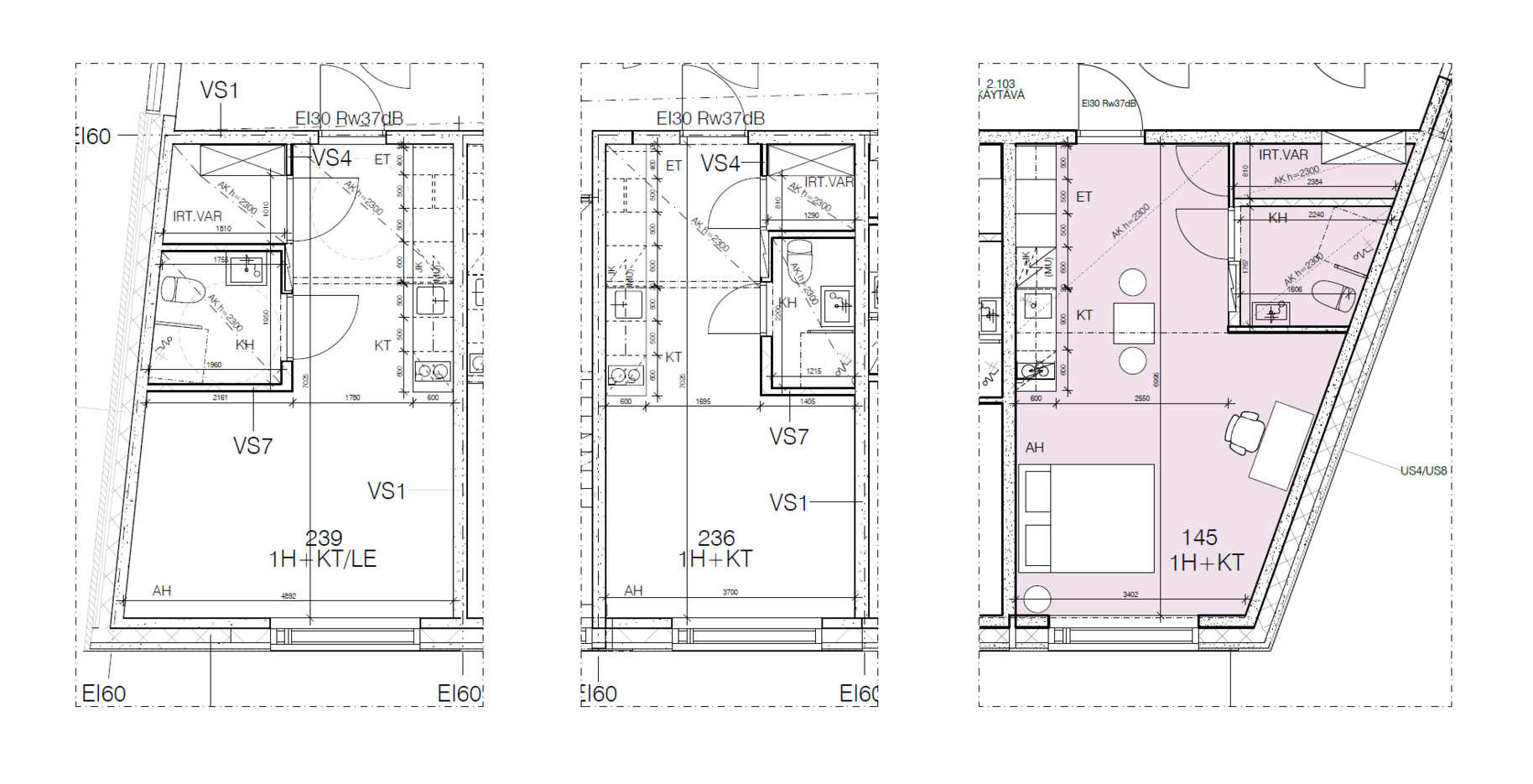 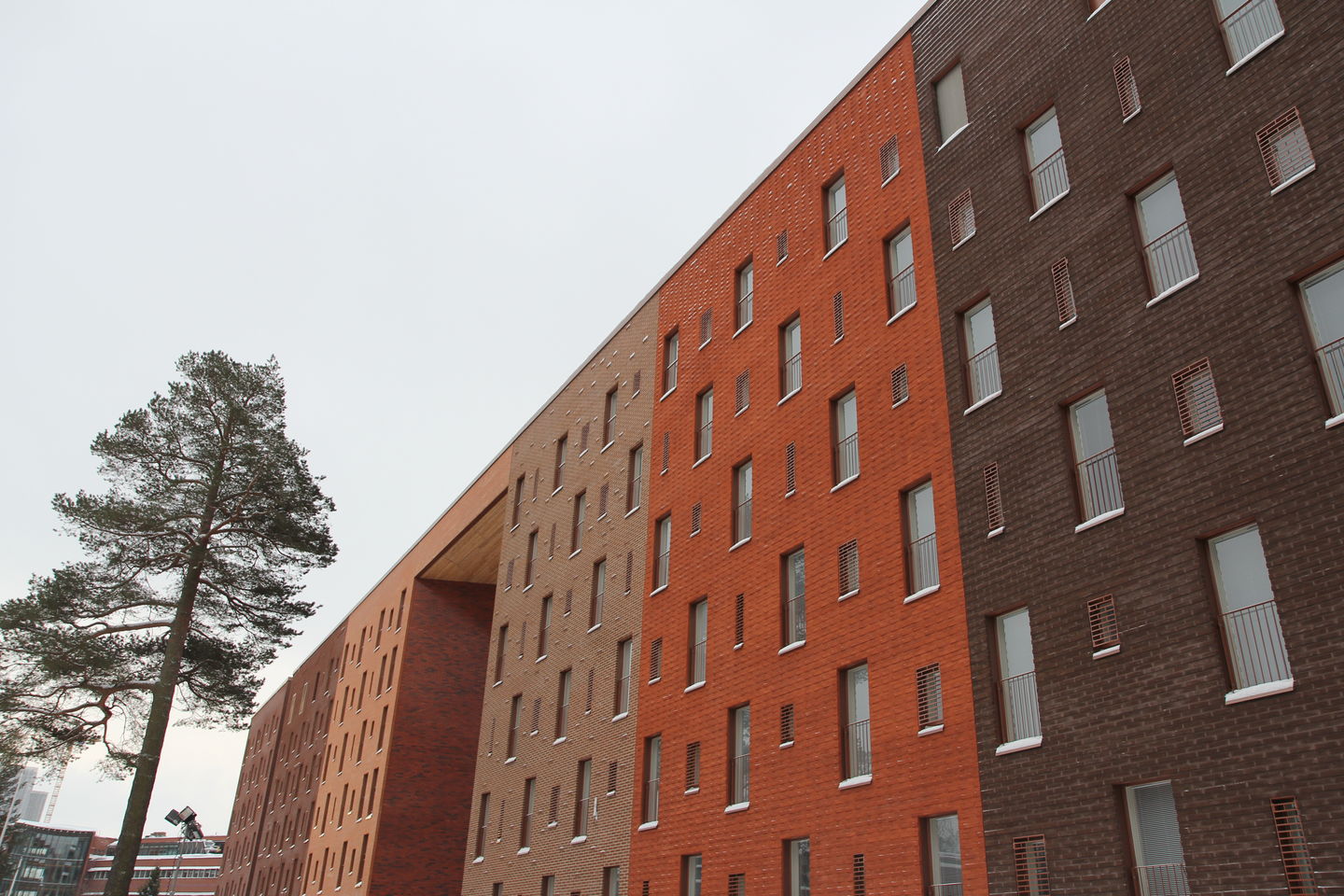 The plot currently includes student housing of AYY and Hoas, completed in 2019. The joint project has been zoned next to these buildings.

The rapidly progressed design phase is heading towards the submission of a building permit. The start of construction has been unfortunately delayed, which AYY has not been able to influence, and the project will not proceed as a joint project according to the original schedule.

In addition to planning, the possibility of building AYY’s housing complex as an independent project on a faster schedule is being investigated. For now, no technical obstacles have been found for this and if progress as an independent project proves to be possible in terms of land use, the construction could start with a slight delay from the original plan in early 2022. There is still an option to proceed as a joint project, and the parties related to land use are working on a possible timetable.

“Construction projects often progress at different paces and delays are not uncommon”, says Petri Kuusisto, Project Manager of AYY’s Real Estate Unit. “We will continue to work on the plans and do our best in the design team to get construction started as soon as possible”.

A total of about 700 student apartments in four different buildings are planned for Otakaari, in the area between Dipoli and Servin Maijan tie near Ossinlampi. Between the buildings, there will remain a forest area near the Teknologföreningen building, which protects the habitat and routes of flying squirrels.

At the planning phase, mainly studios have been designed for the buildings, as they are most popular among students according to the latest research. Compared to the plans for Miestentie, we are still in the earlier phase, and have not yet decided on the number of apartments, common facilities or more detailed plans for interior design solutions.

"Students can still influence the plans for Otakaari!", enthuses Samuli Vehkomäki, AYY’s Board Member responsible for real estate. "In a recently completed resident satisfaction survey, current AYY residents also answered questions about future housing. These results will be used when working on the plans and we are currently considering ways to involved the entire membership”.

Most recently, the project has progressed in terms of street planning, i.e., the location of cycle and pedestrian paths and car lanes around the buildings, as well as the location of parking spaces along the street. The project is currently in a zoning phase and land transactions are prepared. At the same time, plans for the maximum number of apartments in the buildings and the possible locations of common and storage facilities will be specified. Zoning and land transactions are expected to progress during the end of 2021. Detailed design could therefore start during 2022 and the first building could be possibly built as early as 2023.

Illustration of plans on Otakaari 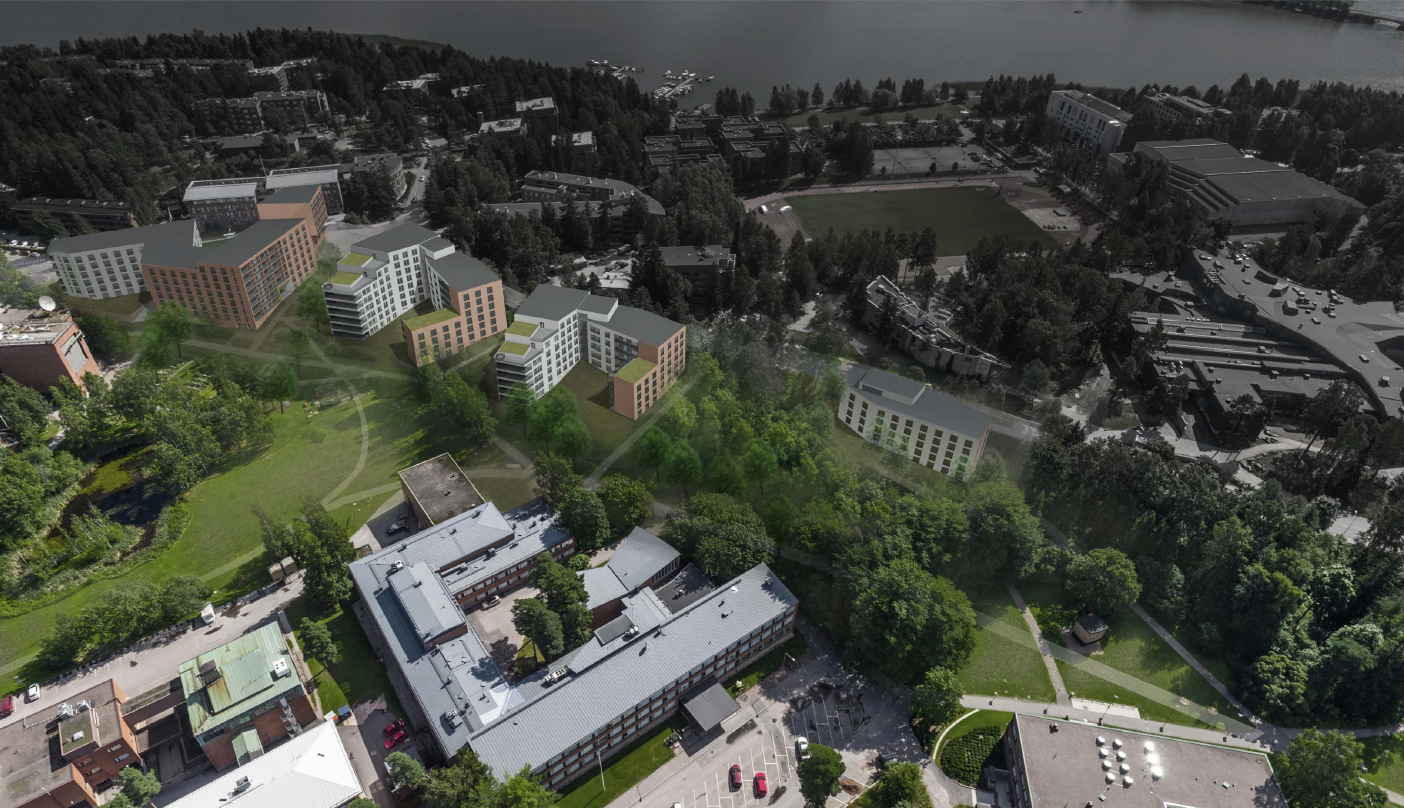 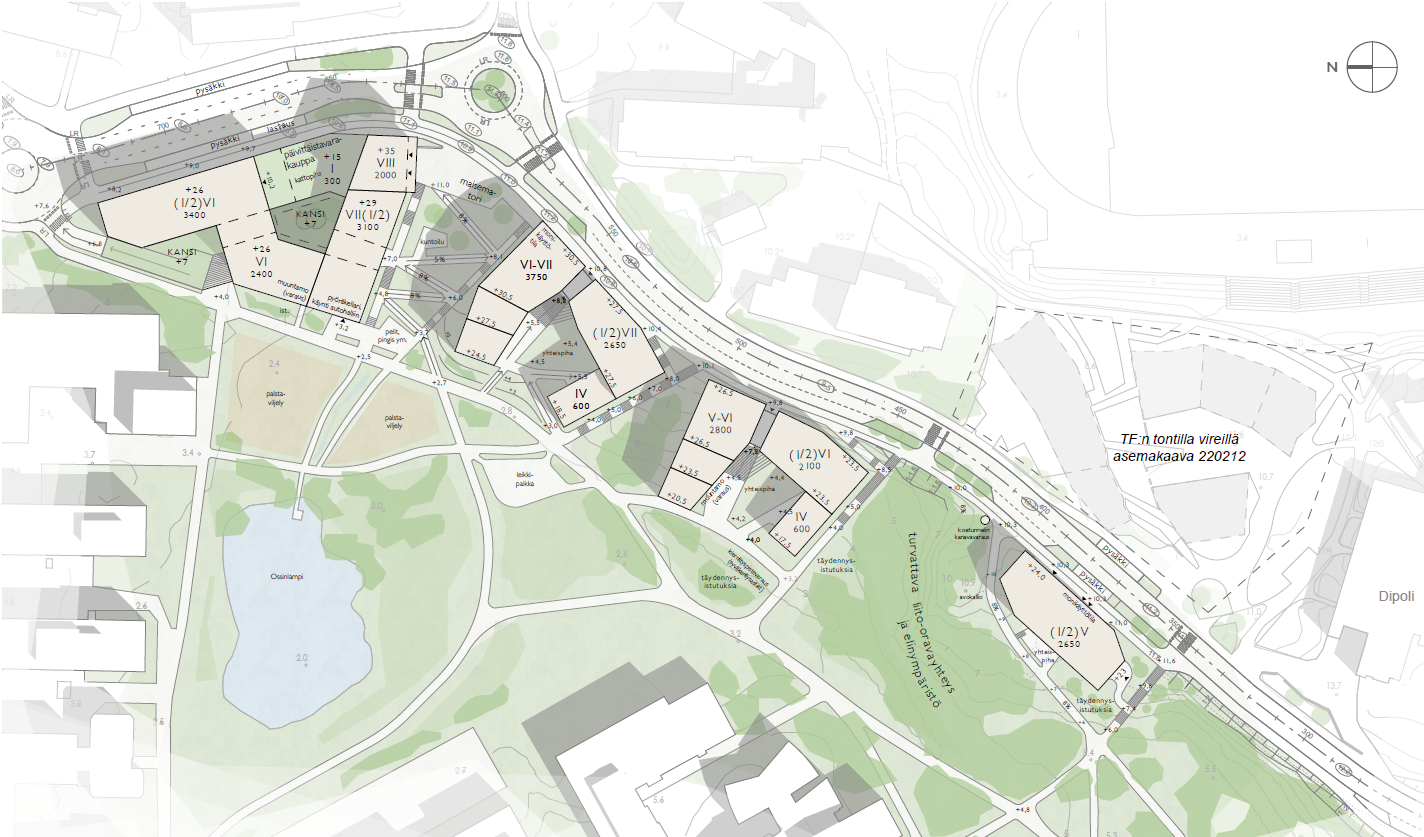 A new four-building student housing complex is planned for Otakaari. Between the buildings there is a forest area that secures the habitat and route of flying squirrels. 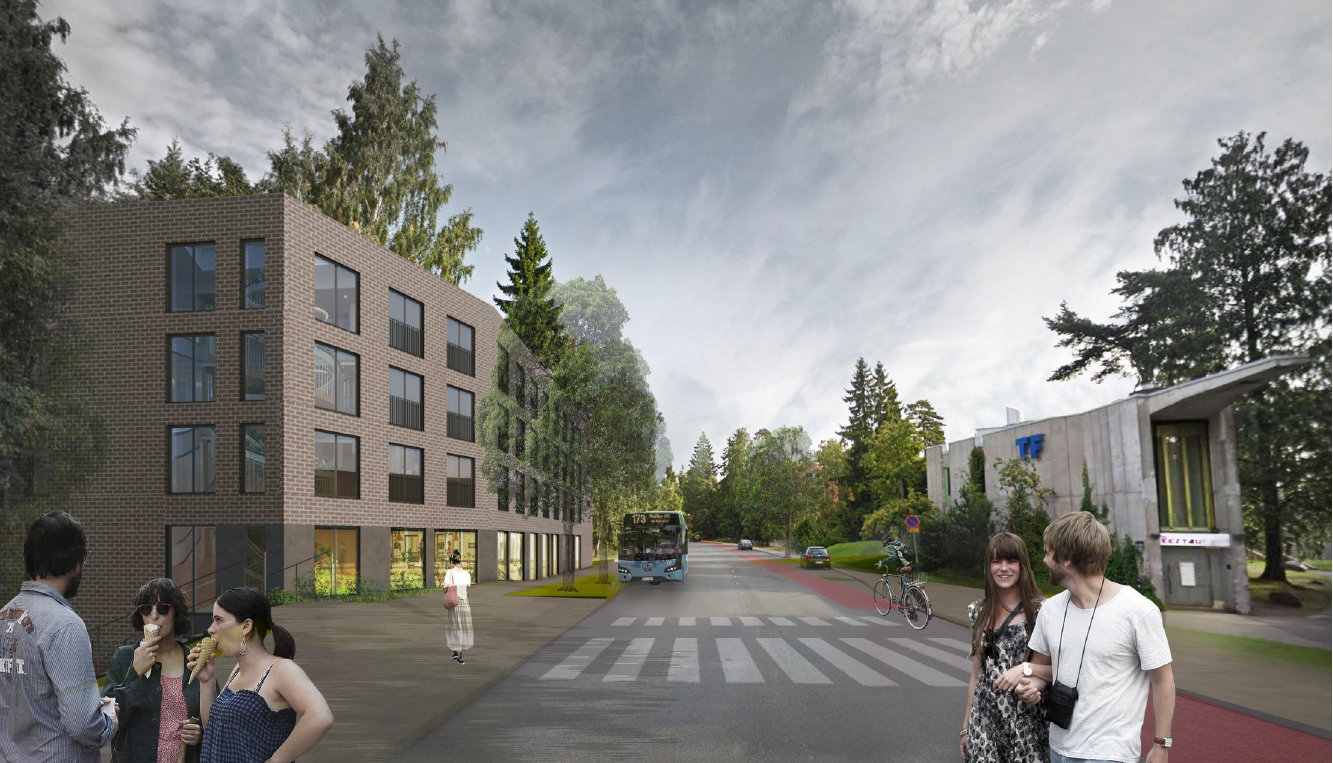 Illustration of architectural plans: View from Otakaari, between the Teknologföreningen building and the southernmost new building towards the north.

Construction projects are progressing step by step by several teams, and members of the Board and the Finance and Real Estate Committee are also involved in the preparation. In addition to the plans for Otakaari and Miestentie, the improvement of current housing stock on Servinniemi is actively progressing with the planning of renovations of different levels. In addition, there are potential construction sites for smaller new sites in this area. We will keep the members informed of the progress of various locations as soon as we take the next steps.

Zoning information for Miestentie can be found here.

Zoning information for Otakaari can be found here.

The most sustainable student life in the world?

According to AYY’s strategy, the Student Union will strive for carbon neutrality by 2030, but is the pursuit of carbon neutrality enough? We cannot measure the sustainability of our activities with just one metric.
Ajankohtaista, Blog Published: 11.5.2022

The message from ARTS must not go unheard

This spring at Väre, the expression of opinions of students could not have been missed. Teemu Palkki, an expert in educational policies, sheds light on the student union’s views on the situation of the School of Arts, Design and Architecture.
Ajankohtaista Published: 22.4.2022

Advance booking of facilities for the fall of 2022

AYY’s associations have the right to book rental saunas, event venues and meeting rooms in advance. In this booking round, you can book facilities for the period 8 Aug 2022 - 8 Jan 2023.
Ajankohtaista Published: 22.4.2022

Frequently asked questions about housing and member services during summer 2022

Here you will find the answer to most of the questions the students have in the spring and the summer regarding housing applications, student cards and membership fees.

Students continuing their studies, in particular, should note that it is not possible to enrol for the academic year during the service break of study information systems between 31 July–8 Aug 2021. If you want your student status to be valid in the beginning of August, please enrol no later than 30 July.
See all